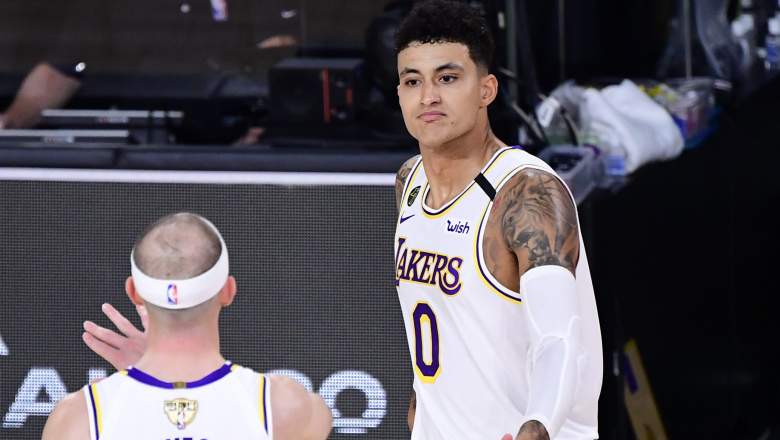 It has not been a great NBA year for Lakers forward Kyle Kuzma thus far, but he does have a three-year, $39 million contract extension coming and averaging a mere 11.1 points per game through the team’s first nine games does not mean he will have to give that money back.

So he is making good use of it, as shown by teammate Quinn Cook. In an Instagram Live video from Cook, Kuzma is seen pulling into the Staples Center in a new, gun-metal gray Lamborghini.

As Kuzma pulls in, smiling and flashing a peace sign, a voice (believed to be Cook) can be heard saying, “That’s that new money! Oh my God, that’s how you feel?”

ALL the latest Los Angeles Lakers news straight to your inbox! Join the Heavy on Lakers newsletter here!

Kuzma signed his new deal with the Lakers in December, ending a year’s worth of trade speculation around his future. The contract does not kick in until next season, when Kuzma will make $13 million. For the 2020-21 season, Kuzma is making $3.5 million.

Kuzma, who hails from Flint, Michigan, is a well-known car enthusiast. Back in 2018, Kuzma did a story with SLAM magazine in which he rolled around Los Angeles in a classic red convertible 1970 Cadillac DeVille, which the magazine described as, “a whip both iconic to his new town and one built from the same Michigan foundation as he is. Even for a kid born in ’95, sometimes you gotta stick to the classics.”

Kuzma did not stick with the classics for all that long, though.

In July 2017, on his 22nd birthday and heading into his rookie season, Kuzma treated himself to a new, black Porsche Panamera, a car that had an average price of $114,000.

In an Instagram post that featured a photo of him with the car, Kuzma wrote, “I remember when it was struggle to get a 1500$ Honda while I was in college…. BLESSING happy birthday 2 me!!!!!! #22”

In December, for a photo shoot for the luxury lifestyle magazine Haute Living, Kuzma appeared in an aquamarine suit (and, oddly enough, with a scarf around his head) in front of his yellow Lamborghini Huracan. That car started at $208,000 but likely ran Kuzma a lot more.

Little surprise, then, that Kuzma has again treated himself with a luxury vehicle.

Kyle Kuzma Has Struggled To Find a Consistent Lakers Role

On the court, things have been less luxurious for Kuzma. He has been used as a spot starter when the Lakers have had injuries, most recently for Kentavious Caldwell-Pope. But Kuzma has clearly had trouble adjusting to his status as a sometimes-sixth-man/sometimes-starter. He said before the season he was unsure of his role with the team.

“The biggest key is Kyle Kuzma,” Perkins said. “They have to figure out what are they gonna do with Kyle Kuzma, how they’re gonna play him, what role is he going to play and break it down to him. Because there’s still times I am watching the Los Angeles Lakers and he still looks lost.”

On Friday against Chicago, Vogel seemed to have taken heed of Perkins’ sentiment, removing some pressure from Kuzma by keeping him in the sixth man’s role. That decision came despite the fact that the Lakers were without Caldwell-Pope again, and also without power forward Anthony Davis.

In a surprise move with no AD, Frank Vogel is bringing Kuzma off the bench. He previously said Kuz would be the designated starter whenever AD/LeBron missed a game pic.twitter.com/kdUF7O5V8f

Kuzma saw limited floor time. At least he has a nice ride home, however.

The Americans are at the top of ESPN’s women’s rankings in history,…
The NCAA made official Monday its plan to host the entire 2021…

We still can’t believe that 40 years ago this week, on March…